The Lands that Feed Us 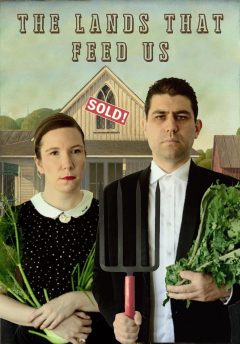 I announced last month that I was planning to pitch a short documentary about the Canadian Wheat Board to access a $50,000 grant from Telus StoryHive.  That plan was forced to evolve, since a condition of the funding is that the project is filmed in B.C., where I live.  I didn’t think a history of the CWB would be very complete without being able to visit the prairies.  So, instead, I’m introducing…

The Lands that Feed Us:  A film about access to farmland and land prices in B.C.  Access to land is probably the #1 concern I’ve heard from B.C. farmers since I started talking about agriculutural issues, but it’s not an issue that has much awareness outside the farming community.  This film can help change that.

The StoryHive grant is a bit of a popularity contest.  Telus runs a four day “election” for the grant, and the top 15 films automatically receive the $50,000 grant (another 15 will be chosen by jury).  The Lands that Feed Us has been accepted for voting.  That means we’ll be asking for your votes when the campaign opens for voting, July 30th to August 2nd.  Vote early and often!  It’s possible to vote on all four days that the campaign is open, which means you can expect to hear from me a lot at the end of this month.

It will also kick off our fundraising campaign for the bigger project.  Because our plan is to raise money through sponsorship, demonstrating success in our campaign to raise $50,000 for The Lands that Feed Us will give potential sponsors confidence in our ability to create both a film with a message and the awareness campaign that goes with it.  And, once Telus has funded the first $50,000, we’ll be able to tell our sponsors that they are supporting a project that already has money behind it!

Preview:  The Lands that Feed Us pitch video

As part of our grant application, we produced a one minute pitch video for The Lands that Feed Us.  It won’t be publicly available until the voting starts, but you can get a sneak preview below.

Feel free to share it around your circle of friends — there’s nothing secret about it — but if you do, please tell them how they can support the project, either by signing up for this mailing list, or by e-mailing me directly at devon@thehandsthatfeedus.ca.

Lying with statistics:  The difference between telling the truth and selling it

One of the things that challenges me most about campaigning is the way getting attention so easily trumps telling the truth.  I wrestled with this quite a bit as I was making the pitch video (which you can watch above).  Naturally, I decided to write a blog post about my struggle:

As my pitch video for The Lands that Feed Us loudly states, “the average farmer will be dead by the time the average farm is paid for.” It’s very headline worthy.  It’s also not very good information.

The post completely takes apart the statistics I used to back up the headline-worthy claim I made in the video.  Even though I took pains to source reputable statistics, and even though I have confidence that the essence of the claim is true, there’s an enormous difference between the pithy, one sentence headline that I used to get attention, and the 1,500 words it took me to explain what was going on behind the statistics.   One is a soundbite worthy of social media.  The other shows just how complicted it is to figure out what “affordable farmland” really means.

Unfortunately, the first step of raising money for a project is to sum the project up in a soundbite.

Read more about the statistics behind land access in What the Stats on Farmland Prices Don’t Tell You.